SOON OFFICIAL NOTIFICATION will be uploaded on IBPS site.

Today, on 30th AUGUST Finance minister Nirmala Sitharaman on Friday announced the merger of Punjab National Bank, Oriental Bank of Commerce and United Bank with the business of ₹7.95 trillion to make India’s second-largest bank, a week after announcing a slew of measures to boost consumer and investment confidence.

Indian Bank will be merged with Allahabad Bank to make India’s seventh-largest PSB with a business of ₹8.08 trillion.

Weak banks can instead become stronger by focusing on their core areas like corporate or retail lending in a particular part of the country instead of full presence across the country. These banks must put in place a strong mechanism for recovery of bad loans at an early stage before the matter goes out of hand.

if You have any Doubt or Query :

Weaker banks can streamline by redeploying capital out of non-strategic and sub-optimal business, review their branch and other networks and pare down losses by introducing technology and efficiency and operating control of these banks should be handed over to professionals. 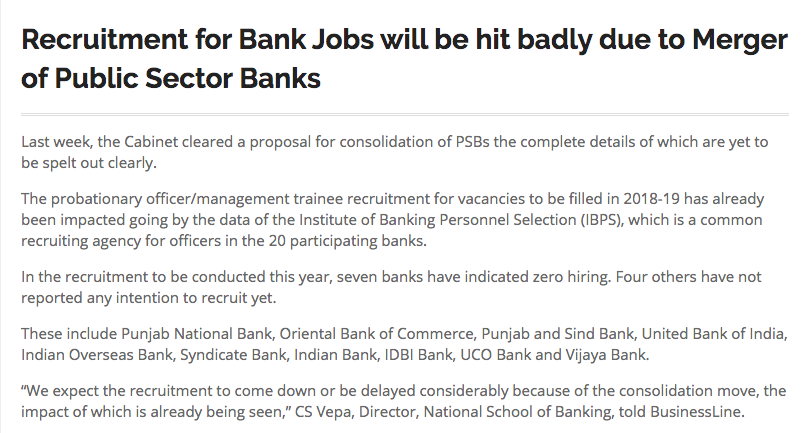 Merging weaker state-owned banks is a complicated task and difficult to execute. Sensitive issues like staffing, branch integration, and priority sector lending will have to be handled carefully. The treatment of legacy issues, closure of redundant branches, redeployment of human resources and efficient allocation of capital will have to be looked into before merger.

what happens to employees when banks merge ?

However, NOTHING has been mentioned by the government regarding this till yet !! Hopefully, presently Working Staff won't be affected Much, but UPCOMING vacancies will surely slow down.

Hi Guys,This is Aman . We love to keep you updated regarding latest news,updates of Tech,Education and all relevant fields.Stay connected